Author’s note: this piece first appeared in the Oct/Nov 2016 issue of MAA FOCUS.  When I wrote it, I didn’t know who would win the presidential election.  As the subject may be timely for many of us who teach, I’m making it available in a more shareable form here. 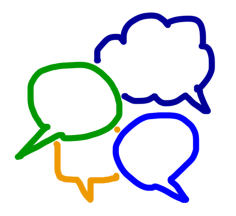 Talking about race is hard. Our nation is wrestling with some open wounds about race. These sores have been around a while, but they have been brought to light recently by technology, politics, and an increasingly diverse population. And regardless of the outcome of the U.S. presidential election, we will all need to work at healing these sores, not just in our personal lives, but in our classrooms and in our profession.

One of the reasons the conversation about any difficult topic is so hard is that the media tends to portray any conflict as “out there”: between groups of people, monolithically opposed to each other. You are either black or white, rich or poor, conservative or liberal, educated or uneducated. We are shaped by these narratives to put ourselves in categories.

For we don’t fit neatly into these categories, even if we think we do. For instance, even though I’m educated, there are many ways in which I am uneducated. I have a PhD in mathematics, but I don’t have a degree in loving my neighbor. So I can feel threatened if someone exposes a hard-won truth that wasn’t part of my own experience.

Or if I lean politically one way, and I find another person’s politics distressing, it may be because I am having an internal debate with a caricature of the other person’s position, rather than taking the time to really listen to her. That’s a conflict inside of me.

And for some, we feel conflict because we are mixtures of categories. I am Asian-American. Which makes me neither black nor white—and thus, both black and white: having shared experiences common to both groups. Depending on the situation, I am sometimes treated like a minority and sometimes not.

So when people talk about “privilege”, I think of “Asian privilege in math”: the idea that people who don’t know me assume I’m good at math because I’m of Asian descent. So I never had anyone in college discourage me from taking a mathematics class (as has happened to women friends of mine), or question whether I belonged at a math conference (as has happened to an African-American friend). So I feel a little bit of unease when anyone uses the word “privilege” because it can make me feel like a free rider. Though I don’t believe Asians are inherently better at math than others, I know I’ve benefited from this impression.

At the same time, I see clearly barriers that Asian-Americans face along other dimensions. When I was a kid, my mother would always call me to come watch when Connie Chung was on TV, because it was so rare to see anyone who looked like me in the media. My Dad would clip newspaper articles when any Asian-Americans made the news in politics or education. When I applied for jobs, I felt the pressure of Anglicizing my vita, since I couldn’t change my name. And it seems C.C. Lin (SIAM President, 1972-74) and myself have been the only presidents of color of MAA, SIAM, and AMS.

So in conversations about race, I feel the conflict inside of me. Words like “racist” can be hard to move past, because I hear fingers pointing, potentially at me. Phrases like “all lives matter” are hard to hear, because they sound dismissive of the experiences of a group of people under duress.

These conflicts are going on inside of us, and they keep us from having good conversations outside of us. But if we recognize what’s going on inside, we’ll be better equipped to engage others meaningfully. We’ll stumble less over words and we’ll be better able to hear other views. We’ll be able to find common ground between two sides.

It can feel easier just to pretend that nothing is going on outside of our classrooms. But we are all human beings, not just mathematical machines. If our students are struggling and their education doesn’t make space for that, then education itself becomes disconnected and irrelevant to the realities of life. Imagine that your mother just died, and nobody at school expressed their sympathies, and everyone just pretended like nothing had happened? How would you feel towards school?

Now, how you make that space will require discretion. Not every student will be wrestling with these issues. Not every classroom will be the appropriate place to broach such topics. But it can be helpful to publicly signal your openness to being supportive and encouraging students to talk with you about such issues. Of course it should be clear that you are offering a listening ear, not starting a debate if you disagree.

This past summer, I was at a math conference and went to dinner with two former REU students, both black. We were joined by a white roommate of theirs and another black friend who was not raised in the US. In the news that week were the shootings of Alton Sterling and Philando Castile, both African-American men. It felt strange to me to have this dinner and keep things at an oddly superficial level when there was this national tension going on. So I created an opening, mentioning my own concern about the news, and asked: “How are you all feeling?”

Everyone got quiet at that point. The friend who was not from the US opened by saying it was strange coming to America and seeing this kind of thing in the news. One of my students then said he felt defeated, as if there wasn’t much that could be done. My other student then described his uneasy relationship with police in his community, having been stopped several times for looking “suspicious”. And then he described an incident when his brother got stopped and had his head smashed into his car even though he was unarmed and non-threatening.

And then he broke down and wept, and couldn’t finish his story. I tried as best as I could to console him. The words I chose were simple: “That should not have happened.” We sat in silence for a while.

Did I do the right thing in offering this space to let his emotions out? Some may wonder. Of course I wondered too.

The next morning, my student came and thanked me for last night’s conversation. It had meant a lot to him to hear my sympathy, and he was grateful that I would want to know his story.

And a few days later, I got an e-mail from his white roommate who had been with us at dinner, but had remained silent during that entire episode, just listening, not knowing what to say at the time. He, too, thanked me for dinner and added:

“I was humbled and encouraged by your intentional and loving questions and care for [my roommate]. Our dinner conversation, both [my roommate]’s words and your care, will stick with me as I go forward.”

What I realized then was that, yes, offering the space was helpful to my REU students. And indeed, the conversation was helpful for me to understand what they were going through. But the conversation was also helpful for the student who had never heard his friend’s story until that evening. The experience of mathematical community for all these students had been strengthened because they now had a shared understanding of being human.